Delhi, Agra and Rajasthan, in India make up the route called the Golden Triangle.

It is important because it consists of monuments designed and visited by every religion. Mathura Kashi and Ayodhya are the three most important places for the Hindus from a religious point of view. The golden colour is symbolic of luxury and importance. Thus the “golden age” refers to a period full of prosperity, and there are destinations which are of prime importance; if they are 2 in number, they are popularised as “Golden Duo” In case they are 3 and located in a triangular shape, they are called Golden Triangle. In Delhi, there are numerous pilgrimage sights. One of the most famous and oldest Delhi pilgrimage places is Kalkaji Mandir. The temple is dedicated to Goddess Kali, and it is believed that the image of the goddess here is a self-manifested one, which dates back to Satya Yuga.

India Gate is located astride the Rajpath, on the eastern edge of the Old Delhi ceremonial axis, formerly called Kingsway, on the eastern edge of the All India War Memorial. In the First World War, the Near and Far East, and the Third Anglo-Afghan War between 1914 and 1921, 84,000 soldiers of the British Indian Army died, this is a memorial ground for them. A structure consisting of a black marble plinth with a reversed rifle, capped by a war helmet and bounded by four eternal flames, was built beneath the archway. As India’s tomb of the unknown soldier, Amar Jawan Jyoti (Flame of the Immortal Soldier) has been in use since 1971. India Gate is counted amongst India’s most significant war memorials in India, and every Republic Day, the Prime Minister visits the gate to pay their tributes to the Amar Jawan Jyoti, after which the Republic Day parade starts. India Gate is often a location for civil society protests.

As one of the 8 wonders of the world, the Taj Mahal in Agra is the jewel of Muslim art and a masterpiece in the world’s cultural heritage. It was constructed between 1631 and 1648 by the Mughal emperor Shah Jahan in memory of his favorite wife; the Taj Mahal is regarded as one of the great works of architecture of the world. Located in the Agra District of Uttar Pradesh on the right bank of the Yamuna River, the Taj Mahal occupies nearly 17 hectares of Mughal gardens. It was built by Mughal Emperor Shah Jahan in memory of his wife, Mumtaz. For its construction, masons, stone-cutters, inlayers, carvers, painters, calligraphers, dome builders and other artisans were requisitioned from all over the empire, Central Asia and Iran. Ustad-Ahmad Lahori was the principal architect of the Taj Mahal. The Taj Mahal is considered to be the most significant architectural achievement in the whole range of Indo-Islamic architecture. Its recognized architectural beauty has a rhythmic combination of solids and voids, concave and convex and light shadow, such as arches and domes, further increasing the aesthetic aspect. The colour combination of lush green scape reddish pathway and blue sky over it showcases the monument in ever-changing tints and moods. The relief work in marble and inlay with precious and semi-precious stones make it a monument apart. The uniqueness of the Taj Mahal lies in some truly remarkable innovations carried out by the horticulture planners and architects of Shah Jahan. One such genius plan is placing the tomb at one end of the quadripartite garden rather than in the exact centre, which added rich depth and perspective to the distant view of the monument. It is also one of the best examples of raised tomb variety. The tomb is further raised on a square platform with the four sides of the octagonal base of the minarets extended beyond the square at the corners. The top of the forum is reached through a lateral flight of steps in the southern side’s centre. The ground plan of the Taj Mahal is in the perfect balance of composition, with the octagonal tomb chamber in the centre, encompassed by the portal halls and the four corner rooms. The plan is repeated on the upper floor. The exterior of the tomb is square in plan, with chamfered corners. The large double-storied domed chamber, which houses the cenotaphs of Mumtaz Mahal and Shah Jahan, is a perfect octagon in the program. The exquisite octagonal marble lattice screen encircling both cenotaphs is a piece of superb artistry. It is highly polished and richly decorated with inlay work. The borders of the frames are inlaid with precious stones representing flowers executed with wonderful perfection. The hues and the shades of the stones are used to make the leaves, and the flowers appear almost natural. The cenotaph of Mumtaz Mahal is in the perfect centre of the tomb chamber, placed on a rectangular platform decorated with inlaid flower plant motifs. The cenotaph of Shah Jahan is more significant than Mumtaz Mahal and was installed more than thirty years later by the latter’s side on its west. The upper cenotaphs are only illusory, and the actual graves are in the lower tomb chamber (crypt), a practice adopted in the imperial Mughal tombs. The four free-standing minarets at the corners of the platform added a hitherto unknown dimension to the Mughal architecture. The four minarets provide not only a kind of spatial reference to the monument but also give a three-dimensional effect to the edifice.

The most impressive in the Taj Mahal complex next to the tomb is the main gate which stands majestically in the centre of the southern wall of the forecourt. The entrance is flanked on the north front by double arcade galleries. On the Timurid-Persian scheme of the walled-in garden, the garden in front of the galleries is divided into four quarters by two main walkways, and each quarter is further divided by narrower cross-axial walkways. The enclosure walls on the east and west have a pavilion at the centre.

The Taj Mahal is perfectly symmetrical. On the Timurid-Persian scheme of the walled-in garden, the garden in front of the galleries is divided into four quarters by two main walkways, and each quarter is further divided by narrower cross-axial walkway stones. In contrast to the marble tomb at the centre of the Taj Mahal complex, the mosque and guest house are made of red sandstone. A large platform covers the terrace in front of both buildings. Both the mosque and the guest house are identical structures. They have an oblong massive prayer hall consisting of three vaulted bays arranged in a row with the dominant central portal. The frame of the portal arches and the spandrels are veneered in white marble. The spandrels are filled with flowery arabesques of stone intarsia, and the angles are bordered with rope moulding. 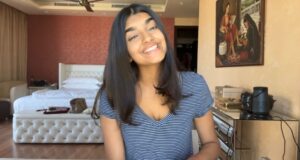 Topics on Realities with Ruha