“Highly sanctified in the shiva purana, rudraksha can be worn by people of all classes and even devotees of other deities, with beneficial effects”.

The term ‘rudraksha’ (elaco carpus seeds) means ‘the eye of Rudra’. They are worn by the devotees of shiva and also strung in the form of a rosary to aid in the recitation of japa.

The vidyeshwara samhita of shiva purana gives an elaborate treatment to the various aspects of the worship of shiva. They take shiva s name, the holy ashes(vibuthi) and the rudraksha beads in to consideration. The three are very holy and are on par with Triveni, the confluence of the three rivers, thus they are integral (vidyeshwara samhita 23:10). 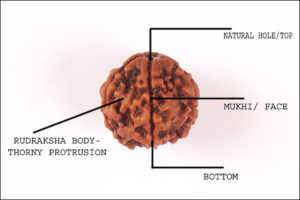 Sage Suta addresses Saunaka and describes the glory of ‘rudraksha’ saying that it was propounded formerly by shiva himself to the goddess in order to help the worlds. According to this account, shiva had been performing penance for thousands of years. Out of sport (lila) he opened his eyes, wanting to help the worlds and the drops of tears (asrubindu) fell from his half closed eyes. It was from these ear drops that the rudraksha plants came in to existence and they became immobile (samhita 25.5-7). Padma purana has a slight variation about the origin (1.59, 131-135). Tripura a demon in ‘kritayuga’ after having killed the devas and destroyed the worlds, stayed firm in the intermediate region (antarik-sapuri).

Shiva heard the pleads of gods and stringing his bow with an arrow killed the demon whom he saw with his divine eye. Drops of perspiration (svedabindu) fell from the body of shiva who was tired with exhaustion as he acquired a body. The great rudraksha was produced from these droplets. The third version is from Devi bhagawatha (skanda11). Here it is said that shiva sat with open eyes thinking as to how to kill Tripura. He sat for thousands of years and after a long time winked and tears dropped down from which the rudraksha tree originated. 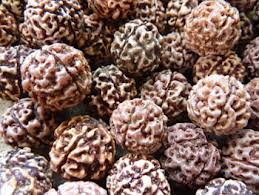 Twelwe types of rudrakshas came from the sun-eye of shiva, 16 from the moon eye and 10 from the fire eye. The first ones were blood coloured, the second white and the third black. Where are the rudrakshas grown? According to shiva Purana, those that are grown in gauda are shiva’s favorites. They are also grown in Mathura, lanka, Malaya, (mountain range in the west of Malabar), sahya, kasi and other places ( vidyesha samhita 25.9-10).

Siva purana states that it is a favorite bead of shiva and all the sins are removed by the sight and contact. He who wears it on his hands, arms and over the head cannot be killed by any living being and such a person would always be respected by gods and asuras. A mantra repeated with rudraksha is million times more effective. Even premature death does not affect the wearer in the least says the puranas. Agni purana talks about the attainment of mukti for one who wears rudraksha with piousness. 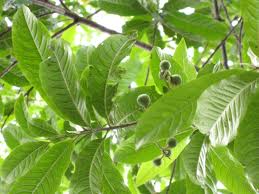 Shiva purana classifies rudrakshas as per colour and the number of faces (vaktra) possessed by them. They are white (sweta), red (rakta), yellow (pita), and black (krsna). These correspond to the four varnas, such as bhramins, kshatryas, vaisyas and sudras respectively and are to be worn according (vidyeswara samhita 25.12.11, 44).

Agni purana divides the rudrakshas into four classes. They are shiva, sikha, jyothi and savitra. The second type of classification, suggested by shiva purana is dependent on the number of faces present in the rudraksha. Shiva purana and padma purana allot merits to each one of these 14 varieties.

The single faced one is shiva and it removes the sins of bhramin slaughter (bhramahatya). The two faced one is god of gods (devadevo), fulfils all desires and removes the sin of cow slaughter. The three faced one confers means of enjoyment. Padma purana calls it fire (anala) and it even destroys the sins of the past births. The four faced one is called brahma. Shiva purana says that its mere vision and contact would bestow the achievement of four aims in life. Padma purana adds that man who wears it would come to possess knowledge of the world. The five faced one is called Rudra and destroys even the sins caused by eating forbidden food or sex with a forbidden woman.

The six faced one is referred to as Kartikeya and the one who wears it on the right arm is rid of sins, such as killing of bhramins. Padma purana reinforces that six faced rudraksha would make a bhramin honored by the king, a kshatriya assured of victory and vaisyas and sudras of prosperity. The seven faced one is called ananga and even a poor man becomes a lord by wearing it. This is called ananta by padma purana and by wearing it, poison does not spread in the body.

The eight faced one is called vasmathi and bhairava. It promises full life and after death the wearer becomes the trident-bearer (shiva). Padma purana refers to this as vinayaka himself. Besides various other merits the wearer acquires skill in writing as well as in other undertakings. The nine faced one is named as Bhairava. Shiva purana also adds that Durga of nine forms is its presiding deity. The ten faced one is referred to as janardhana by shiva purana. The devotee who wears it will have all his desires fulfilled. The 11 faced one called Rudra. Padma purana says that 11 rudras reside in the 11 faces and that one should wear it on top knot (sikhaya). The wearer acquires the merit of donating thousand cows to a bhramin.

The 12 adityas are supposed to be present in the 12 faced one. Padma purana indicates that it should be worn round the neck. Shiva purana calls the 13 faced one visvadeva as auspicious. Lastly the 14 faced one is the highest shiva. Padma purana prescribes the wearing of it on the head and arm.

How to wear Rudraksha

Shiva purana has details as to the number of rudrakshas to be worn on the different parts of the body and the mantras that are to be uttered while wearing them on the head, ears, neck and on the chest. It is imperative to utter the mantra. In short rudrakshas are highly glorified. Shiva purana says that people of all varnas, asramas, and women can wear them. The most interesting fact is that devotees of mahavishnu may wear the rudraksha unhesitatingly. The sanctity and significance of rudraksha adds protection and well being to human race.

“Life” in your handDr. Vanamala Parthasarathy